BOARD MEMBERS IN ATTENDANCE:

The Pledge Of Allegiance was recited.

The meeting was called to order by President, Jerry Agrusa at 9:00 am.

The minutes from the 9-10-22 monthly board meeting were read by Nancy Bell. An adjustment to reword minutes about letters to trailers was done.  Motion to approve adjusted minutes made by Chris Sellers-seconded by Al Vitous.

The Treasurer’s report was not presented

RENTALS – If a rental is not in a sub with deed restrictions, rules may not apply. If there are any issues with renters, suggest authorities can be called.  Cameras are allowed if pointed on their property.

Some board members went to the September 12th meeting at Pioneer High School. Discharge, wells, waste and chemicals used were discussed. Williams County did not approve the discharge pipe permit.  But the building is still in process of being built.   The investors are putting in a large amount of funds.

Jerry suggested the November meeting to be held at 9:00 am at the store.  Although Friends Community Center could be an option.  We will meet in December.  January and February are tentative since we might not have a quorum.

Tyson Trail Road is bad.  It should be fixed for emergency vehicles. Friends of LD offered them to have their mailboxes moved by Friends Community Center.  Being a privately maintained road, Assoc is not involved.  Amboy does not have it in their budget to repair road. I

LDCA has one more year in Clark’s gentleman’s agreement. Jerry inquired about a 5 year plan for weed spraying and get weeds under control.  We could move forward to get 51% of lake owners to agree for spraying and make it a special assessment. Cost would be allocated by all the lake front properties owners.  The investors would have an interest in maintaining the lake instead of being inundated with weeds where our property value would decrease.  Kevin got a letter that will be discussed at November’s meeting.

Nancy brought up about organizing a golf cart parade.  This would be July 4th weekend and prize for best decorations.

A newsletter to assoc members with the billing will be done next Spring.  This will include wake time and no wake zones on the lake.  Several other items could be added.

Wake time hours according to R281.730-11 have been posted on the LDCA website.

No wake areas are less than 200 feet shore to shore.  Strip connecting North and South lakes are less than 200 in some areas but not marked as no wake. No wake is defined as the slowest your boat will go without losing control.  Jim received a letter from Michigan Lakes and Streams that will be discussed at the next meeting.

A few Friends of Lake Diane board members joined us at the meeting. They have extended an invitation to use the Community Center for association meetings, golf outing and picnics.  It can hold 185 people, has tables, chairs, bathroom and kitchen areas.  And it is heated!  Perhaps have Boaters Safety class at the Community Center in 2023.

A shadow box plexiglass frame will be installed near shelter house for assoc information.

LD does not have overflow of water on ‘Go Forth Dam’. Water is low due to lack of rain. Not sure who owns dam property. Looking into a meter to measure water level. Might have to spend $400-$500 for survey.

Form for board’s approval to add Jerry Agrusa for LDCA Financial information will be done at  November’s meeting.

At 10:19, Jerry made a motion to adjourn meeting.  Al seconded the motion. A vote was taken and the meeting was adjourned.

BOARD MEMBERS IN ATTENDANCE:

The Pledge Of Allegiance was recited.
The meeting was called to order by President, Jerry Agrusa at 9:03 am.

The minutes from the 7-9-22 monthly board meeting were read by Nancy Bell. Motion to approve by Jim Watt-seconded by Kevin Mack. The minutes were approved as written.

Jim Watt presented the Treasurers report. Several bills plus insurance bills came in. Jim may contact another insurance company to get a quote. LDCA license (LARA) has been paid and is good till October, 2023. Received Consumers Power bill. Very little kilowatts used, all taxes and fees. Jerry motioned to approve treasurers report as written. Scott seconded. All approved,

TRAILERS – Jerry and Chris to follow up to see if trailers re-appear. A couple are concerning. Last attorney letter gave 10 day notice to remove. Suggested that we tour on Memorial Day weekend, 2023 and send heads up letters of advisory notification of potential legal precedents.
RENTALS– comment made on website about rentals. There was a reply saying a resident was successful and any concerned residents may take action. The association and the board are not involved in any actions being taken. Although a no rentals statement is in the deed restrictions.

For LDCA to be involved in above, Atty would look into to see if the 7 parks would give legal standing to pursue both trailers and rentals. If yes, move forward next Spring. Then could go in front of judge. But parks are not in all subdivisions. Then up to the resident in that area.
Roads: Private roads are not funded or maintained by county. 3 ways to fix roads. Mail delivery could be affected

Reminder of Aquabounty meeting on Monday, September 12th at the Pioneer High School. Several board members will attend. Williams County pushing back about drainage lines

Jerry proposed future meetings to be held at 9:00 am. Store opens at 8:00 so winter meetings could be held there. Time changed was approved by all board members. We will close the shelter house after the October meeting.

Landscaping is still a mess. There are concerns about tripping and falling. If no changes by end of October, Jim will ask Amboy Twsp about status.

Bill was lower due to acreage decrease. Lily pad spraying was done on 8-23-22.

There is a broken child swing at Chickadee Park. Kevin will remove before someone gets hurt. Look into getting funds to replace next year.

The picnic was cancelled due to weather. Kim Byrne did a fantastic job on the golf outing. Thank you Kim! Wine crawl was successful again.

Kevin talked to friend in Irish Hills area. Weed spraying is done at their lake and billed to all owners equally for the next 7 years on their winter taxes. Need 51% of the approx 330 LD owners to approve. Township has to agree to put on tax bill. Kevin will get petition that they past around in Irish Hills. They used a company called JPM (lake mgmt) located in Kalamazoo to spray weeds there but would come to Lake Diane. More than 1/2 get sprayed so 51% might not be an issue. Cost would be lower for those who are paying now. Annual assoc fee would be decreased.

Per Drain Commissioner, can’t make board on dam higher without 2/3 vote, petition, $10K deposit for study etc. Was higher in 2017 until someone complained. If water level is below 950, board could be put in.

Suggestion to get map of hazards and shallow water in lake. Several known but not all marked. DNR and diving training team would have to get involved. DNR will not allow more than 2 buoys.

Take steps to add Jerry Agrusa for LDCA Financial information. Make plexiglass board cover for message board. Many letters are getting blown away.

At 10:47, Jerry made a motion to adjourn. Jim seconded the motion. A vote was taken and the meeting was adjourned. 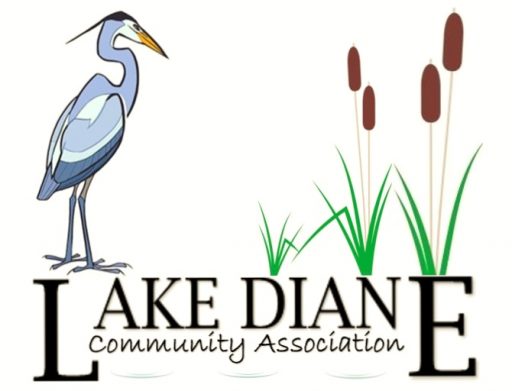 The Pledge Of Allegiance was recited.

The meeting was called to order by President, Jerry Agrusa at 9:00 am.

The minutes from the 6-11-22 Annual board meeting was read by Nancy Bell. The minutes were approved as written.

TREASURER’S REPORT:
Jim Watt presented the treasurers report. Fireworks and Golf outing payments were made. Funds are down from last year at this time. No complaints about the price increase for spraying. Jerry motioned to approve treasury report as written. Kevin seconded. All approved.

NEW MEMBER ACTIVITY:
No increase or decrease in members. Stands at 199

AQUATIC LIFE:
The second spraying of weeds was done the week of June 27, 2022. Jim got the invoice for lower than expected. Difference could be they sprayed 30 feet from shoreline instead of 50 feet. Lily pads will be sprayed late August/September for additional cost.

TRAILERS:
The quantity of trailers are down, 6 years ago had 33 or 34. Chris and Jerry will take audit of existing trailers on lots. Maybe have attorney Kim Burger send another letter, but $225 per hour! Suggestion made to help neighbors with instructions on what they can do to pursue trailer owners. We can get a head start for letters next year – in April. Last letter from Attorney was June, 2021

RENTALS:
There were 2 Rentals stopped by Doug Whittler by EOY. Residents on dame subdivision must pursue, not LDCA. It is a high cost to get legal action by attorney. Jerry to contact Doug to see who he used.

CALENDAR OF EVENTS:
Golf Outing – July 23rd.
Annual Picnic – August 13th
No bounce house. Jerry will order 12 dozen corn (from James & Esther) and 120 hot dogs. All essentials will be in shed. Nancy will put on message board after golf outing message is gone – picnic is open to all LD residents.

WELCOME COMMITTEE:
We are out of Boaters Safety Books. Jim will ask class instructor if he has any to donate. Cost is $1.99 per book on line. $60,00 can be used from Park budget if necessary. Nancy will write wake hours of 11:00 – 7:30 on ‘Its the Law’ sheet in Welcome Package-if missing.

WEBSITE:
Chris volunteered to contact Jeff W on View Dr. Maybe take over but could be a cost we don’t have now. Will look into license or working together.

OLD BUSINESS:
Roads have some bad areas but not completed yet. They are getting worse with heavy trucks on them. Kevin will attend Amboy Township meeting on Wednesday to ask about status update.

NEW BUSINESS:
Shelter House rentals are open to all owners on LD with no charge. New agreement created to be signed by board member and renter.
There has been reports of boaters abusing no wake hours. Different times (DST vs Standard time) posted on different websites. Kevin will look into sign at public launch. Jerry will inquire with a friend at Merry Lake about wording of their wake hours.
It was agreed at the annual meeting for the Assoc board all to have 3 year terms. If necessary , have formal update on bylaws at next Annual meeting

At 10:29, Jerry made a motion to adjourn. Chris seconded the motion. A vote was taken and the meeting adjourned.

The meeting was called to order at 10:04 by Jerry Agrusa

The minutes of the March meeting were read and approved.

Jim Watt presented his monthly report and it was accepted as read.

1. Aquatic Life – discussed spraying contract, 2 years ago our cost was $27.500. Increase is about 40%. When a home owner signs the check to make their payment, that serves as permission. No additional signatures are needed. No spraying before June 1″ is our practice.

2. The signs for our lake out on Territorial Road have both come down, is there anyone who wants to repair them?

3. The current calendars have gone out with our annual bills,.

1. Our Annual Goose Removal Permit has arrived. We have until April 30th to do our nest destruction

1. Jerry moved to change our fiscal year to match the calendar year. This will be on the agenda for our annual meeting.

2. Plans for the fireworks were discussed. The applications are on file with the Township.

At 10:30 Jerry moved to adjourn the meeting, Nancy seconded the motion.