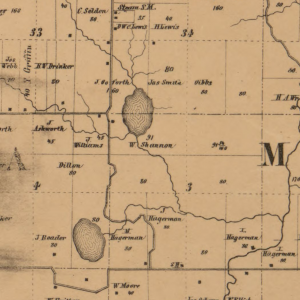 Both lakes were part of tributary systems leading to the Clear Fork Creek that Lake Diane is still part of.

American Wonderland Corporation began developing Lake Diane in 1964 with the construction of a dam, referred to as the Goforth Lake Dam at the time, on one of the tributaries to Clear Fork Creek. The two spring fed, natural lakes located on the tributary, Goforth and Hagerman, were inundated when the reservoir was created.  The dam was officially completed in 1966.

The lands west of Lake Diane were platted as 1/4 to 1/3 acre lots and put up for sale.  After subdivision of the lands, there were two farm homes located off Sampson Road who were not included in the original plat.  In the original days, the roads surrounding Lake Diane were only to be used by property owners and their guests. Property owners were also required to have decals on their automobiles and only the property owners and their guests were allowed on lake property.

Mr. Floren Klopfenstein became the President of Wonderland Realty Corporation in 1966 and continued to sell lots which were located on the waterfront and lots located on the back of the property. Klopfenstein was responsible for the lake naming, as it was named after his daughter, Diane. In the summer of 1966, East Diane Drive was stretched out from Point Drive to meet where the shelter house is now. This was done to allow the east and south sections of the lake to be flooded so Lake Diane could be enlarged. Also during this time period, several parks were created for access to the lake. 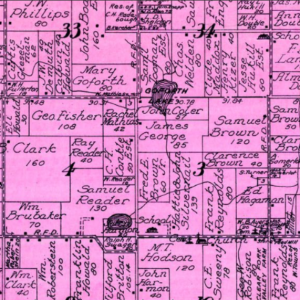 Hillsdale County decided in 1967 that it would no longer give permits for sewage holding tanks. They also decided to stop giving out building permits, with the exception of 10 acre plots which were sold on the far east side of the lake and those located in the wooded area East of Woodbridge Road. During this time period, there was an annual maintenance fee of $20.00 per lot to Lake Diane Incorporated.

In 1969, the Lake Diane Property Owner’s Association (POA) was organized. On April 10, 1970, a Michigan based company called Universal Lands Corporation purchased a substantial amount of land in the Lake Diane complex. This land was purchased from an Indiana Corporation which had owned this specific property for a short period of time.

In May of 1974, Universal Lands Corporation sent letters which stated that they were beginning the process of installing control sewers so that all platted land could be built upon.

In August of 1977, the Lake Diane Corporation was formed and incorporated under the Summer Resort Owners Act  In order for property owners to be able to vote, Grants of Authority needed to be signed to be officially fully annexed into the corporation limits.

On December 12th of 1981, the first meeting was held which concerned a sewer system at Lake Diane.

In 1982, weed spraying in the lake was started and the unplatted land on the east side of the lake was sold and developed. A locally owned company called Frontier Properties Inc. that consisted of Hal Hendricks, Abe Carter and Gib Friskney, was one of the developers in the 1980’s.

In 1983, Amboy Township accepted sealed bids from existing property owners for tax reverted lots at Lake Diane. This was about the same time that we lost the status as being a private lake and public access was developed by the state where the original boat ramp and park were. Existing property owners came together to build a shelter house where it exists today off of East Diane Drive.

By 1986, maintenance fees were still $20.00 per lot plus a $10.00 fee for weed control. Also in 1986, COAT (Cottage Owners All Together) was formed and a lawsuit was filed to address deed restriction issues.

On June 9th, 1989, the lawsuit brought about by COAT was settled upholding our deed restrictions against trailers. There had been roughly 50 trailers which were mostly permanent on lake properties.

Word was received on February 21st of 1990 that sewer installation would begin that summer.  Around that time, a group doing business as Faust Real Estate, Frank and Rosemary Ward, developed the Grandview Estates Plat.  The same group, in 1996 as Lake ‘N Land Realty, also developed Timber Ridge and North Bay plats.

On July 4th of 1993, the fireworks crew had their first fireworks display at Lake Diane. Also during that summer, our first annual Parade of Garage Sales was started on the lake in June.

In 1999, hearings were started to have Amboy Township in Hillsdale County pave some or all existing roads at Lake Diane.

In late fall of 2002, the paving was complete on the west side of Lake Diane, Diane Drive West, Horn Drive, and the relocated Woodbridge Rd, only due to a decision of the property owners.  Owners living on the eastern side of the community decided against pavement, leaving Diane Drive East, Hilltop, View, and other roadways unimproved.

On September 29th of 2004, a hearing was held in Hillsdale Circuit Court to protect our lake property against “key holing”. We later determined that a township ordinance would have accomplished this. Also in 2004, weevils were planted in the lake to combat Eurasian Milfoil weed, rather than using herbicides.

In the fall of 2005, an effort to annex all properties involved in the Lake Diane Incorporated area was denied by the courts.   The existing effort to become annexed into the official corporate limits and have voting and full membership rights is still left up to each property owner to file a Grant of Authority.

In June of 2006, the first Goose Round Up was held, as well as the first Boater’s safety class.  That July, the first Annual Golf Outing and Chicken Barbecue was held.

The 2010s:
In 2015, a vote of the members of the Lake Diane Corporation was takes to address the dues for members who have signed Grants of Authority.   The Dues increased to a fee of $125/yr to help ensure solvency of the Corporation and to help cover the cost of seaweed and lily pad management that the Corporation handles.
In the Summer of 2016, the Michigan Department of Natural Resources as well as households along Sampson Road from Woodbridge Rd to the West to Woodbridge Road to the East, as well as Woodbridge Road from Sampson Road northward a few hundred feed past the DNR boat launch area was improved with a tar and stone hard surface treatment.  The area north of the boat launch along Woodbridge road to Cellars Road was improved with new drainage, additional culverts for tributaries, and signage.   Later that year, work that started earlier on Cellars Road from Woodbridge Road eastward to S. Hillsdale Road was improved with new drainage, tree removal, and signage.
In the Summer of 2016, members of the community also came together to improve the main community boat lunch and shoreline at the terminus of East Diane Drive.
Summary:

For many years, Family Picnics and get togethers have been held. Since 1969, many Board Members of the Lake Diane Property Association have contributed over 40 years of time and effort to help make Lake Diane grow and prosper.  When you visit or attend one of our community events, take a moment to thank those who volunteer their time, energy, and carry the task of trying to keep our corporation and community sustained.

If you know of any other interesting Lake Diane history, please feel free to send it to us via the contact form.