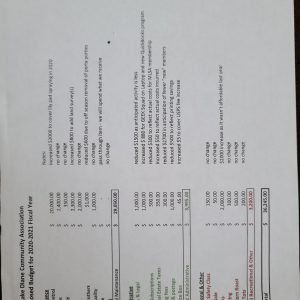 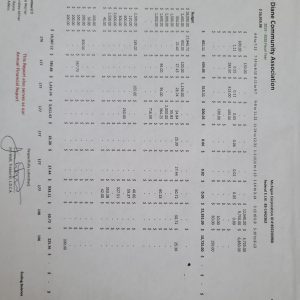 The Pledge Of Allegiance was recited.
The meeting was called to order by President, Roger Giallorati at 10:11am.
ELECTION OF OFFICERS:
The floor was opened for nominees for LDCA Board of Directors Trustees with three positions available.
Nominees were: Kim Byrne, Paul Dance, Scott Hercula, and Scott Coakley. Jim Watt made a motion that nominations be closed. Rod Anderson seconded the motion. A vote was taken, and the motion passed unanimously. Upon closing of nominations, Paul Dance withdrew. Elected by unanimous consent were nominees Kim Byrne, Scott Hercula and Scott Coakley.
TREASURERS REPORT:
Jim Watt presented the Treasurers report. The report was approved as written.
The Proposed Budget for 2020-2021 Fiscal Year was presented. Kim Byrne made a motion that the (attached) proposed budget be approved. Jerry Agrusa seconded the motion. A vote was taken, and the motion passed unanimously.
The minutes from the May 9, 2020 meeting were presented by Kim Byrne. The minutes were approved as written.
NEW MEMBER ACTIVITY:
To date there are 196 members.
AQUATIC LIFE:
Jim and Roger collected goose eggs for the goose egg collection and nest destruction program. There were 17 eggs collected. Collection was down due to restrictions placed by the governor due to covid.
Lake weeds were treated the week of June 9, 2020. Clarke Aquatic will be returning to address some areas.
Al Vitous requested that the “NO WAKE” buoy be placed further out from the channel leading into Chickadee Cove. Kevin responded that the placement of the buoy must be approved by the HCSD.
Arda Boucher presented information regarding the wakes for watercraft users.
Water testing has not been done this year due to the state budget. Roger reported that the budget was recently passed, and is approved for five years.
The dredging is complete in the cove behind Shoreside Plaza. The spoils need final excavation. Scott reported that his estimate to dredge all “trouble areas” is $350,000. Areas will need to be prioritized by need. It was also noted that all areas which touch the dredging area are required to have a signature of permission by the property owner. Raising the dam level by three inches has been discussed. HCDC attorney indicates that this is a “significant” increase. New plans must be drafted for submission and approval.
PARKS:
There is a need to survey Riviera Park and Outlot A Park. Terry Rupp volunteered to contact Lodzinski & Associates for the job
Two loads of limestone need to be delivered at the boat launch near the shelter house. Terry Rupp is checking with the county see if they will deliver them.
There continues to be a problem with “John Q Public” using the parks for picnics, swimming and even camping. The parks are specifically for the use of Lake Diane property owners. Additional signs will need to be ordered for placement.
JoEllen Wright was thanked for her donation to the parks with the proceeds from the wine crawl held each Labor Day weekend.
CALENDAR OF EVENTS:
Garage Sales – June 20th
Golf Outing – July 25th
Annual Picnic – scheduled for August 8 with more details to follow
NEW BUSINESS:
Kevin discussed the importance of attendance at upcoming Amboy Township Meetings to discuss developing a dock ordinance. With the current plans of development at French Quarter there is a concern that “key holing” could become an issue.
At 11:20 Roger made a motion to adjourn. Jim seconded the motion. A vote was taken and the meeting adjourned.